ParaSport® Ontario. There is a sport for everyBODY!”

The Power of ParaSport 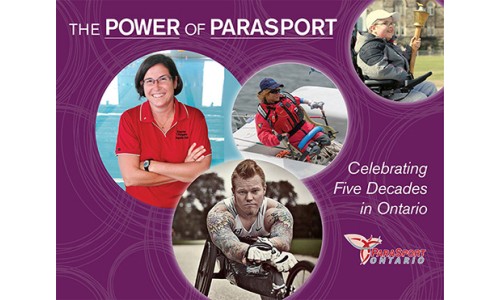 - +
A pioneer’s path is rarely a straight one. It’s a meandering course. And characteristically, settlers prosper in a land far removed from the trails traversed to get there. Such is the case with the Parasport Movement in Ontario.

Ontario’s Parasport pioneers were paramount in charting a revolutionary new course for athletes with a disability not only in our province, but in our country and internationally.

Not only in boardrooms, but in backyards, locker rooms, on rehab mats and bleacher seats is where the machinations for change were first voiced and sculpted by these visionaries. Hardly could they have imagined what the Parasport Movement looks like today.

Weaving through many obstacles, their achievements serve as the fabric and cornerstones of the movement as we know it today, paving the way for new generations of parasport participants and athletes. Their heroic stories, many previously uncelebrated, will be lauded in The Power of ParaSport: Celebrating Five Decades in Ontario.

An Ontario 150 project, supported in part by the Ministry of Tourism, Culture and Sport, this legacy publication (tabletop-style book format), will educate and motivate, inspiring others to lead, compete, volunteer and advocate to ensure the continued awareness and growth of parasport opportunities for Ontario’s youth and adults with disabilities.

How to resolve AdBlock issue?

Action 1: You are using adblocker. Please support us by whitelisting this domain - https://parasportontario.ca/

We acknowledge the land on which ParaSport® Ontario was built is the Treaty Lands and Territory of the Mississaugas of the Credit and the traditional territory of the Anishinaabe, the Wendat, and the Haudenosaunee peoples, many of whom continue to live and work here today. This territory is covered by the Upper Canada Treaties and is within the land protected by the Dish with One Spoon Wampum agreement to peaceably share and care for the resources around the Great Lakes. Today Toronto (also known as Tkaronto) is home to many First Nations, Metis, and Inuit peoples and acknowledging reminds us that our great standard of living is directly related to the resources and friendship of Indigenous people.
© ParaSport® Ontario. All rights reserved. Website by unlimbited
To Top